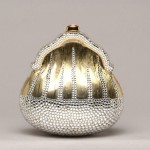 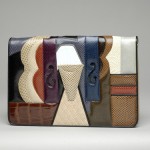 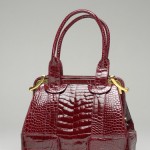 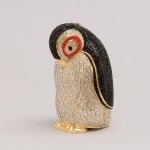 Born in 1921, Judith Peto Leiber was the first female apprentice and master in the Hungarian handbag guild. She survived World War II in hiding, and met her husband Gerson, an American soldier, in the streets of Budapest when the city was liberated. After moving to the United States as a GI bride, Leiber worked as a pattern maker and then foreman for several handbag companies until she formed her own company in 1963. Initially, she and her husband were the sole employees of the company.

Leiber did all the designing and production while he made deliveries to major department stores. Leiber’s first factory had four employees whom she worked alongside, teaching them her expertise.

“There was such a sense of camaraderie, with all of us working together, producing these handbags,” said Leiber. “I made my first line in a gray/green calf which was not that well received. Nevertheless, I was determined to make my bags as beautiful and as well as I could and not to compromise. I have never swerved from that goal. Never.”

Today, her handbags are included in the collections of the Metropolitan Museum of Art, The Smithsonian Institution, The Victoria and Albert Museum and many other collections.