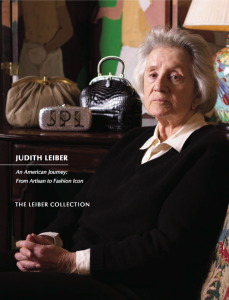 Springs, NY —- The Leiber Collection in Springs, East Hampton, will exhibit an extensive retrospective collection of Judith Leiber handbags, representing her creative output from the late 1940s to the mid 1990s. The exhibition will open on Saturday, May 26, at 1 PM, followed by a reception from 2 to 5 PM. The exhibition will run through the Labor Day weekend.

Judith Leiber, a Holocaust survivor and world renowned handbag designer, created artful handbags carried by nearly every First Lady from 1953 to the present. Her handbags are in the permanent collections of The Metropolitan Museum of Art, The Smithsonian, The Corcoran Galleries, and the Victoria and Albert Museum.

In his biography of Judith Leiber, entitled No Mere Bagatelles, Jeffrey Sussman wrote that many celebrities, such as opera diva Beverly Sills collected Judith Leiber handbags the way others collect paintings and sculptures. It’s not surprising then that eminent designer Geoffrey Beene said that Judith Leiber’s bags are objets d’art.

Among the celebrities who own Judith Leiber handbags have been Pat Buckley, Barbara Bush, Mary Tyler Moore, Nancy Reagan, Barbara Walters, Hillary Clinton, and the wives of Don Rickles and Frank Sinatra, amongst various others. In addition, many of the actresses who had been nominated for Academy Awards or Emmys carried Judith Leiber handbags to the awards’ ceremonies.

The Leiber Collection, which is located at 446 Old Stone Highway, is set amidst seven acres of gardens, each uniquely designed by Judith’s husband, Gerson Leiber. The Collection and gardens are open to the public, free of charge, every summer from Memorial Day to Labor Day, Saturdays and Sundays, from 1 PM to 4 PM.